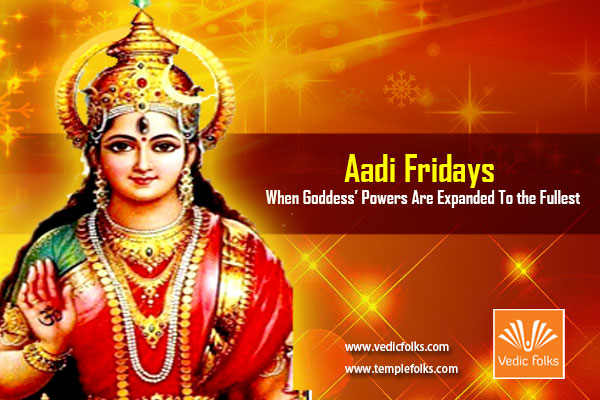 When Goddess’ Powers Are Expanded To The Fullest

The Maha Shakti Who Removes Darkness From Everyone’s Life

Aadi is a month of spirituality, worship and godliness and has high cultural significance. The sun starts is southern movement and emits certain subtle energies and there is excess amount of oxygen supply. Due to this reason, souls get basic supportive energies. Therefore, the force of Maha Shakthi is more evident than that of Lord Shiva and the month of Aadi so perfect to invoke the Goddess’ grace, also the perfect epitome for elegance and benevolence, that’s the Divine Mother Adi Shakti. So, let’s revere Her this month and all the days that follow be fortunate and successful for each and everyone.

Also, during the month, the Sun begins its journey southward from North and is called Dakshinayana Punya Kala. For Devas or demi gods, its night time or twilight zone and they are engaged in worshipping the Maha Shakthi to remove darkness from their lives. Lord Shiva is with his consort and therefore her powers are doubled during this month. The mother protects her devotees from all negative forces and therefore regarded as the most auspicious month of the year for Devi worship. The sun steers its way to enter the Kataka rasi (Cancer sign that is ruled by the Moon) and hence this month is also called Karkataka.

But then it also told that Friday is Shukravar or the day of planet Shukra, Venus. This planet signifies beauty, wealth, and materialistic auspiciousness. A Vedic story tells that Goddess Lakshmi, a form of Shakti was given to King of Devas, Lord Indra by a sage. Lord Indra neglected the goddess which annoyed the sage who in turn cursed the Devas and asked the guru of demigods Shukracharya to look after the wealth goddess. He did as he was told and therefore his day Shukravar or Friday became so auspicious for female deity worship.

During Aadi, the powerful vibrations of the goddess are received by the earth thereby permeating it with auspiciousness and positivity. Invoking the Goddess during the time ensures prosperity for everyone and also since she is a fighter of evil, she protects her devotees from negative influences and calumny.

Each Friday of Aadi month is special in it’s own way. The first Friday brings plenty of prosperity and growth of wealth in the family. Shoolini Durga worship protects wealth and assets, control the mind and physique. She cures all types of fever and cools the body that has heated up.

The second Friday of Aadi month also is dedicated to another form of Goddess Bhuvaneshwari. She is the feminine power of the universe, the very creator whose energies permeate the earth for sustenance and protection. She provides relief to all tribulations, grants 64 divine virtues. She’s beauty personified what with a moon jewel that bedecks her attractive crown. She nullifies all doshas and removes hurdles in acquiring material wealth and comforts.

Multiple Blessings From Multiple Goddesses In a Single Month

The third Friday of Aadi can be devoted to the worship of Chinnamasta. She is one of the Dasa Mahavidyas. She helps her devotees achieve victory over their foes. She is also known as Vajra Vairochani or Prachanda Chandi Devi. She blesses her followers with wealth, negates their karmas of past birth and eliminates debt and poverty.

The last Friday of Aadi month is very special and propitious where a combined ritual to invoke the Ashta Matrikas can be done to get their powerful blessings. Each of these forms have emanated from their male counterparts like Brahma, Vishnu, Shiva, Varaha, Narasimha, Indra, etc. These divine mothers are Brahmani, Vaishnavi, Maheshwari, Indrani, Kaumari, Varahi, Chandi or Chamundi and Narasimhi or Pratyangira. Imagine being blessed by these overtly powerful forms of the universal goddess that too eight of them on a single day! Invoking their blessings during the last Friday of Aadi month fetches multiple boons to overcome struggles and get relief from all types of evil effects like black magic, misfortunes and even dangerous living creatures.