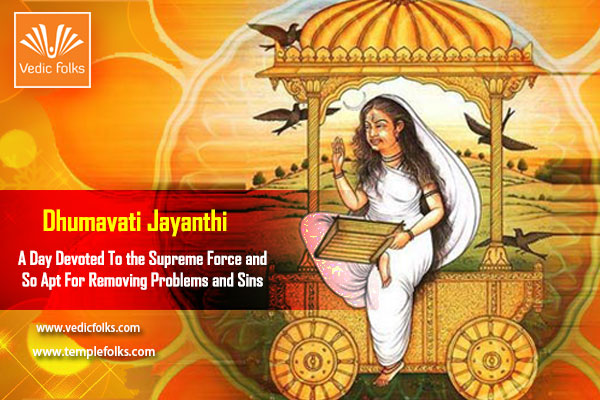 The Smoke Goddess Bereft Of Her Consort Lord Shiva

The goddesses of Hindu pantheon manifest as powerful, beautiful, resplendent, wealth bestowing, knowledge showering, nurturing and graceful beings. But then there are a few of them, who present themselves as fierce, dark-complexioned, wrinkled and inauspicious forms that materialised to cut off negativity and other special purposes. But whatever the appearances, they protect the good and punish the evil. One such is goddess Dhumavati.  She’s smoky complexioned, rides a chariot with a flag having the visual of a crow. Her name means the one made of smoke.

Almost all the goddesses have their origin from the universal Mother Shakti. She is the primordial cosmic energy, the Supreme Being or Maha Shakti. According to ancient scriptures, Adi Shakti split herself into three aspects one is material Shakti represented by Durga or Parvati, Kali which is Vidya Shakti and Yoga Maya.

Vidya Shakti or the goddesses of eternal knowledge are ten in number and Dhumavati is one among them. She is depicted as a dark, aged, ugly widow who is inauspicious and unattractive and represents poverty, frustration and despair. Goddess Dhumavati carries a winnow in her hand and rides a horseless chariot.  In spite of these negative traits, she’s bestower of siddhis or super natural powers, fulfills all desires of her devotees, grants knowledge and Moksha. Since she lives in burial grounds, she can ward off negative forces or energies that are a threat to mankind.

The Goddess Who Represents Viveka, A Spiritual Discipline

But, why this gory appearance for a goddess whose lineage is that of radiance and splendour?! Well, once goddess Sati, the consort of Lord Shiva, was extremely hungry. She asks the lord for food which he couldn’t provide. She was so famished and angry, that she devoured the lord who cursed her to roam the earth as an ugly widow. She emitted smoke and her body shrivelled and shrunk to the Dhumavati form.  She is sometimes seen holding a bowl of fire that represents inevitable cosmic destruction. The winnow that is used to separate the chaff from the grain, represents Viveka, a spiritual discipline that grants an individual the ability to discern or discriminate between the real and unreal, permanent and temporary which is very essential for achieving Moksha or spiritual liberation.

On Dhumavati Jayanti, people take out procession at night for the goddess who is worshipped by all for her manifold blessings. She fulfills desires, destroys all your obstacles and therefore she is called kalahpriya for offering solutions to the problems of the world. On the day, many rituals and ceremonies are held to invoke her blessings. A Chandi Homa, invoking the supreme goddess, and also a Dhumavati homa are very auspicious and significant for the general well-being of all.