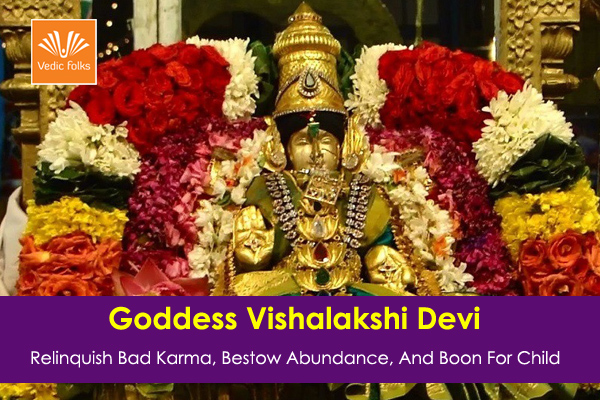 Goddess Vishalakshi devi temple is dedicated to Goddess Vishalakshi who is the consort of Lord Shiva, a ferocious form of Lord Kaala Bhairavar. The meaning of the word “Vishalakshi” means “One who has large eyes”. This temple is located in Miraghat (Manikarnika Ghat) on the banks of River Ganges, at a few distances from Kashi Vishwanath temple in Varanasi town of Uttar Pradesh, India. Here, Goddess Sati’s wrist part had fallen in this temple.

How To Perform Pujas To Goddess Vishalakshi Devi

Devotees are offering Prayer to Goddess Vishalakshi on the day of Navaratri, Durga puja and Kajali Teej. At that time, devotees are decorated the temples with flowers and lights and devotees gain spiritual energy, purifies our heart, and calm life.  Festival like Karthika Ekadashi to Karthik Poornima (November) for five days are celebrating in a great manner.  Camels are brightly dressed and decorated, camel races are held. Song, music, dance is also played out and an exhibition is also held which draws people from across the world.

While Adi Shankaracharya visited this temple, he performed prayers to replenish the powers of the temple, which had borne the brunt of several invasions. He also installed a Sri Yantra and it is to this Yantram that puja is done. Kumkumarchana to this Sri Yantra is considered very auspicious and can be performed by asking the pujari there.

On the right side of this temple is an adjacent room with two gated areas which respectively house a sculpted horse and an alternative image of the goddess Vishalakshi. These are occasionally brought out during special festival processions when Goddess  Vishalakshi, seated upon the horse, is wheeled about for a small procession. Within this room is a smaller shrine dedicated to Lord Shiva and housing a large lingam (the sacred phallus). The verandah of this temple is directly in front of the main shrine is the most adorned area inside the temple. It has four concrete pillars with floral designs, yantras, and protective figures. The ceiling is designed to produce a powerful sound effect (canopy-like effect) and is painted with a framework of 12 squares each containing a different image from a zodiacal house. Above the main shrine is the depiction of Lord Shiva and Goddess Meenakshi’s marriage. Goddess Meenakshi (Fish Eyed) herself is a popular South Indian goddess and is here associated with Goddess Vishalakshi( Large eye)  along with Goddess Kamakshi ( Desire Eye), to form a triad of Goddesses.