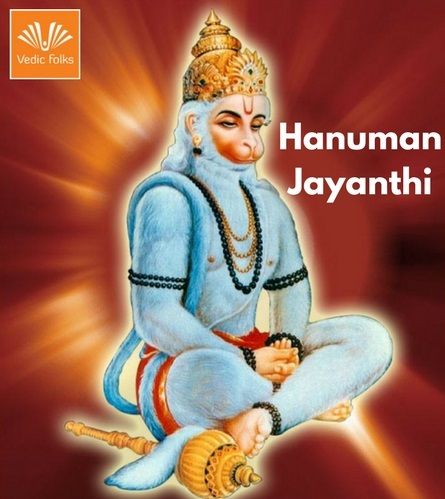 Lord Hanuman Jayanti is celebrated as the birth of Lord Hanuman is considered as one of the avatars of Lord Shiva is said to be the child of a nymph by the wind god, once as a child tried to grab the sun mistaking it as a fruit got hurt on his jaw i.e., Hanu, is a personification of nature, who was born on the Anjaneri mountain.

Lord Hanuman – The God Of Strength And Devotion

He stands tall and mighty and he’s the most popular deity in the Hindu pantheon. An avatar of Lord Shiva, Lord Hanuman is worshipped for his great exploits, strength, devotion, perseverance and power. His achievements in the epic Ramayana is well known and the task that he was assigned, that of locating Sita, was successfully achieved by Him.

How To Revere Lord Hanuman

People fast on Tuesdays or Saturdays and offer the god special food of his liking like laddoos, butter, fruits etc. but the greatest prayer of them all is the Hanuman Chalisa which is a hymn dedicated to the lord, composed by ancient poet Tulsidas. Chalisa indicated 40 poetic verses which can be recited by anyone irrespective of age and by repeated utterances the hymn gets embedded in the mind of a devotee. But cleanliness of body and mind is needed to read the verses. It is so powerful that when one is troubled by nightmares he/she has to keep the Chalisa under the pillow to sleep peacefully. It also helps get rid of evil spirits that cause harm.

The significance of the elements has been explained beautifully in ‘Kambha Ramayanam.’

The Five-Faced Hanuman Is Rather Unique In His Appearance And Grants Manifold Blessings:

Vedicfolks Panchamukha Hanuman Homam Vedicfire rituals on Hanuman Jayanthi are so propitious and powerful that it invokes the powerful god to bless you with everything in life.

Click Here To Know How Do Worship Lord Hanuman On Hanuman