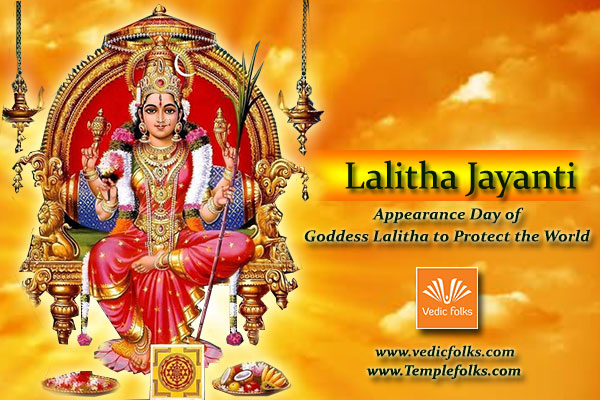 Lalitha Jayanti is a Hindu festival dedicated to Goddess Lalitha occurred on a pournami day of Tamil month Magha according to Hindu calendar. It is generally celebrated on February month of every year by devotees with great devotion to get blessings from Goddess Lalitha.

Goddess Lalitha Emerged With Having Divine Energy Of Pandavas

Goddess Lalitha origin day is celebrated as Lalitha Jayanti in many places. One legacy of Devi Purana explains the incident of Goddess Sati who was the form of Goddess Parvati became a Goddess Lalitha. Once King Daksha who is son of Lord Brahma did penance for very long period to Goddess Adiparasakthi and wants to get the daughter in form of Goddess Adiparasakthi. She showed mercy and give blessings to get daughter like her own form. Dakshayani was born to King Daksha according to his desire and grew up as Princess. Later, Dakshayan did penance for long period to get a ideal husband Lord Shiva. According to her wish Lord Shiva offered marriage with Goddess Sati (Dakshayani). But King Daksha opposed this marriage and he avoided to invite Lord Shiva during his yagya conducted at his kingdom. Dakshayani came to yagya and pleased his fathers to understood good wonders of Lord Shiva. But King Daksha was not ready to praise Lord Shiva. So she sacrificied herself in fire in yagya and appeared as Goddess Adiparasakthi by leaving the human form to give curse to his father. The curse about death of Daksha comes from Lord Shiva made shocking to King Daksha. Lord Shiva Knowing death of Goddess Sati and he was not able to digest death of Goddess Sati. so he started to roaming around the world with carrying her coarpse in the fire form. Lord vishnu used his chakra to dissect the Goddess Sati coarpse into 108 parts into the world in order to bring back Lord Shiva from this mental illusion. The parts of body fell into different places and established shakthipeethams. Goddess Devi again origin into same place as Goddess Lingadharani and worshipped as Goddess Lalitha by devotees. Lalitha Jayanti celebrated by remembering the appearance of Goddess Lalitha on this day in great manner all over India. Goddess Lalitha gives protection to the world. The Other legacy tells the origin of Goddess Lalitha happened to protect the world. Once Lord Vishnu arised his chakra to desrtoy the world. Goddess Lalitha appeared to prevent the action of Lord Vishnu. Hence Goddess Lalitha is worshipped by many devotees to get blessings of protection from world annihiliation.

Famous Celebrations And Their Benefits On Lalitha Jayanti

Lalitha Jayanthi is auspicious day to perform rituals, pujas, homams to get blessings from Goddess Lalitha who gives happiness and abundance wealth to devotees.

Chanting of Tripura Sundari Sahasarnam gives positive thoughts to devotees on the prayers of Goddess Lalitha.

Devotees while participating in rituals pujas, homams conducted on this Lalitha Jayanti day getblessings from Goddess Tripura Sundari to get rid from black magic and evil effects.

Story and Significance of Lalitha Jayanthi