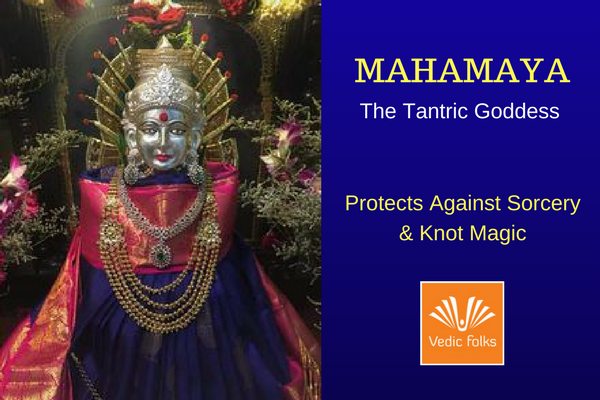 In this Tantric concept, the term Mahamaya defines an incredible complex aspect of the universe, which bears numerous variations.  Some of these are divine creative force, cosmic energy, dreadful power that destroys all limitations, Goddess who gave birth to everything, grants divine power, feminine force, fundamental energy etc. According to the tantric view of Mahamaya, Goddess Mahamaya has innumerable ways of incarnating herself. Mahamaya is the popular energy kundalini, massive energy that yogis arouse and examine with fascination, snake coiled at the base of the spine, fear equally and totally charmed by it. However, the snake is simply a symbol of the divine and spiritual path, not the path itself.

According to one version, a horrible demon Mahisasura was threatening the base of the universe itself and the existence of all gods. Lord Brahma, Lord Shiva and Lord Vishnu become enraged and the gods emitted their divine powers as a fire coming out from their mouth. These various divine flames combined into a one and finally took the shape of the powerful female goddess with eighteen arms. This female power, Goddess Shakti was the one who destroys the demon Mahisasura and at the same time saving the people in the entire universe from the demon.

Goddess Shakti symbolizes the force of transformation and regeneration and also an extraordinary force that lead to bliss in tantric opinion. According to the other sources, Goddess Shakti represents the powerful force, profound fusion between couples and the divine game of love and bliss itself. Goddess Shakti is also called as Lalitha Devi which means the one who plays.

Worship Goddess Mahamaya On Thai Amavasya Is Very Important why?

Goddess Shakti in her supreme form is identified as the great Goddess Mahamaya or Mahadevi. Goddess Mahamaya has the power to create and destroys all the things in the universe. She is often represented as the mysterious form which emerged everything. In the Mahamaya Tantra, the entire universe is considered to have emerged and to sustain permanently by the two forces, opposed in term of difference, Lord Shiva the male divine form and Goddess Shakti the female form of energy.

She is the dominant source of spiritual attainment. She is the embodiment of knowledge, pervades all three worlds, source of all gods, to create, sustain and also destroy. Like her name signifies, she is a great illusion that constitutes apparent reality, a strongly fierce power that destroys all that exists.  She can take form in whichever way she wants. But she is described as being dark blue form, has four faces, blue in the east, yellow in south, red in west and blue-green in north. Her four hands hold a skull cap, a Katyanga, a bow and arrow. She fulfills all desires, frees you from diseases and grants spiritual attainment.

The Mahamaya Tantra ritual on Amavasya is highly auspicious for removing negativity because evil spirits are more rampant when it is pitch dark. Invoking Goddess Mahamaya, a manifestation of Mother Shakti, who is known for crushing evil, is very significant as she is very conscious on the New Moon day. Devotees worship her fervently to arrive, destroy evil and uplift righteousness. She defeats negativity and also relieves one of all planetary dilemmas.