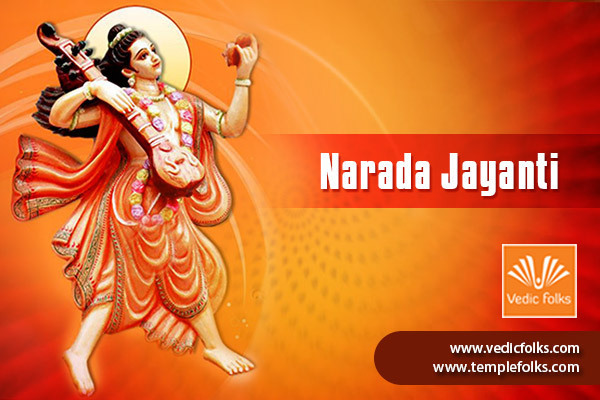 Narada Jayanthi is an excellent occasion celebrated all across India. The day refers to the birth ceremony of the well-known Vedic Sage Narada Muni. He was the principal messenger of godheads, and that is why he is the most celebrated deity too. Lord Narada Muni is the son of supreme goddess Saraswati and the creator of the universe, Lord Brahma. According to the Hindu calendar, the occasion of Narada Jayanti takes place in the Vaisakha month of the Krishna Paksha.

Great sage Narada holds a very vital position in our mythological culture. He is renowned as the first journalist on earth. On Narada Muni’s birth anniversary, patrakar or journalist day is also profoundly celebrated. Lord Narada is known to play beautiful music using Veena. Narada Muni holds an exceptional place in our mythological culture. He used to travel to Patal Lok, Swarg Lok, and to Earth to distribute the messages of godheads.

Narada Muni is assigned the primary duty of transmitting information because he is known as an embodiment of truth. He is distinguished for his spirit and virtues of speaking truth only. Narada is a firm devotee of mighty Lord Vishnu. He is always seen chanting Narayan Narayana in the devotion of the great god Vishnu only. It is believed that Narada’s messages often create a furious stir between Suras and Asuras. But that commotion was imperative to maintain a stable balance on earth.

The first ritual is to wake up early in the morning and take a bath before sunrise only. After having a bath, wear clean and hygienic clothes. Then, clean the puja place and the idol of Lord Narada and Vishnu. Perform the puja using flowers, lighting lamps, incense sticks, tulsi leaves, and kumkum. Recite Vishnu aarti and pray to Lord Vishnu and Narada. Prepare a special prasad and devote it to the godheads. Intense devotees of Lord Vishnu also observe a fast on Narada Jayanti. They avoid all kinds of spices and cereals, only consuming fresh fruits and milk products. One of the most prominent elements of this fast is that devotees do not sleep at night. They spend the entire night reacting mantras in the applause of Lord Vishnu. Mighty godhead Vishnu is mainly celebrated on the birth anniversary of Narada Muni because he was an ardent devotee of Lord Vishnu. Devotees recite sessions of Vishnu Sahasranama on Narada Jayanti. Visiting Kashi on Narada Muni Jayanti is also very auspicious. Devotees also conduct charity sessions to please the Supreme Lord Vishnu.

By worshipping Narada Muni, one can obtain virtues like speaking and conveying truth only. Those who want to attain excellent communication skills should also adore Lord Narada Muni. Worshipping Vishnu on Narada Jayanti also weaves a good number of benefits. Devotees who chant the Vishnu mantra regularly and especially near their death attain utmost salvation. Adoring mighty Lord Vishnu brings a plethora of happiness and optimism to the house. God Vishnu blesses his devotees to fight evil catastrophes of the world. Those who pay their sincere tributes to Lord Vishnu amass the power of relaxation and tranquillity. Worshipping Lord Vishnu can add more grace and charm to anybody’s life as he is the most notable deity of Hindu mythological culture. Boost happiness, the consensus in your life, by cherishing the highest energies of divine Vishnu.

These are some of the significant windfalls which one can seek by executing Narada Jayanti poojas and homams. Seek the sacred blessings of Lord Narada by observing the festivities of his Jayanti with utmost splendour.