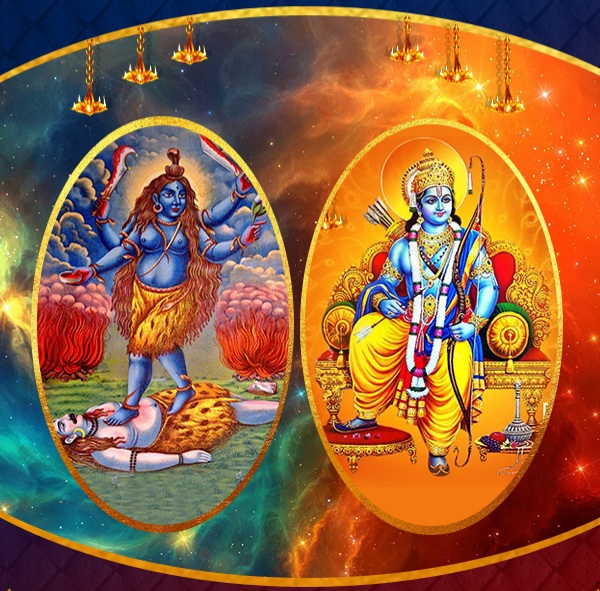 Tara Mahavidya is the second Dasa and one of the most dominant Mahavidyas. The mighty goddess bestows with immense knowledge, which leads toward the successful attainment of salvation. She is eminent as the goddess of compassion, kindness, and protection; she safeguards the humans from all the adversities and catastrophes of the evil forces. The Sanskrit meaning of the word Tar is protection; thus, Tara Mahavidya’s name represents her most important power to protect and preserve. Goddess Tara is prominently known as a saviour; she is the one who protects the inferior from storms and crises. Tara Mahavidya is the ultimate saviour; even her name implies taking over or the one who supports crossing difficult paths.

Lord Rama is one of the supreme manifestations of Lord Vishnu. The commanding Lord Rama elucidates the path of righteousness, high virtues and humanity. Lord Rama is a divine deity who incarnated on earth in human form to eradicate darkness and nurture goodness.  He is one of the most merciful Lords who bring illumination to life. The supreme Rama has the best qualities and is considered the supreme being in the entire universe.

The ultimate goddess Tara is closely connected with Gauri Devi; she embodies many traits of Gauri and delivers happiness in the world. In her Gauri incarnation, Tara portrays the motherly attributes and divine force to fight adversity with compassion and kindness. Tara Mahavidya is prominently known as Ugra Tara, the most brutal or vicious manifestation of divinity. She, in this avatar, bestows immense intellect and wisdom to her followers.

Tara Devi Jayanti & Sri Rama Homam significance are very immense . Tara Devi Jayanti & Sri Rama Homam includes lighting a fire kund to attract the aura of goddess Tara and Lord Rama. Mantras, slokas and legends are narrated in the Homam to bring you the divine aura of the supreme godheads. Various other rituals are performed, and devotional offerings occur in the Homam.

Seek all the above blessings by celebrating Tara Devi Jayanti & Sri Rama Homam with us. We are executing the Homam under the guidance of proficient priests. We will help you earn the great blessings of Lord Rama and Goddess Tara with this incredible Homam performance.