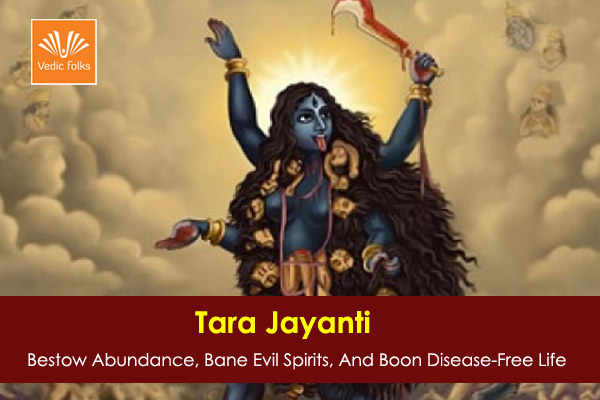 Tara Jayanti is dedicated to Goddess Tara or Goddess Tara Mahavidhya, an incarnation of Goddess Shakti in a tantric form who is the consort of Lord Shiva. The term “Tara” comes from the Sanskrit stem “tr” denotes “Star” or “Nakshatra”.

According to the legacy, Goddess Sita within the sort of Goddess Kali slew the demon Ravana, Lord Brahma and other deities propitiated her with hymns. Appeased, the goddess assumed the calmer sort of Goddess Tara.Holding her sword in her right, she accepted a tiger skin loincloth from Lord Brahma, removed her golden crown, piled her hair into one jata atop her head and bound it with the serpent Akshobhya.Rudra lay on the bottom and requested the boon of Brahmavidya (knowledge) from her, to which she responded by placing her left foot on his chest and enlightening him. As thanks, Lord Shiva offered her a blue lotus and a skull cup. Goddess Kali and Goddess Tara are similar in appearance. They both are described as standing upon a supine Lord Shiva in an inert or corpse-like form. However, while Goddess Kali is described as black, Goddess Tara is described as blue.Both wear minimal clothing; however Tara wears a tiger-skin skirt, while Kali wears only a girdle of severed human arms. Both wear a garland of severed human heads. Both have a lolling tongue, and blood oozes from their mouths. Their appearances are so strikingly similar that it’s easy to mistake one for the opposite.She wears a crown made from skulls of 5 meditating Buddhas. Tara has eight forms called Ashta Tara and therefore the names are Ekajata, Ugratara, Mahogra, Kameshwari, Chamunda, Neela Saraswati, Vajra, and Bhadrakali. Goddess Tara is claimed to be more approachable to the devotee (Bhakta) or Goddess Tantrika due to her maternal instincts.

How To perform Pujas To Goddess Tara

Goddess Tara Jayanti is a crucial ritual and festival for Vedic religions. it’s celebrated with tons of devotion and adherence to rituals. Goddess Tara Jayanti is widely known on the Ninth day of Sukla Paksha in Chaitra month. When there are problems in devotee’s life, Goddess Tara makes her presence felt by eradicating all the issues and sins and there was darkness before the origin of the world. There was no energy and therefore the Goddess of this darkness was Goddess Kali. A ray of sunshine emerged during this darkness which was referred to as Tara. She is that the power of a sage Akshobhya and Goddess Tara is Swamini Devi of each Pind within the universe. She emerged at the time of the origin of the world and hence she came to be referred to as Goddess Tara.