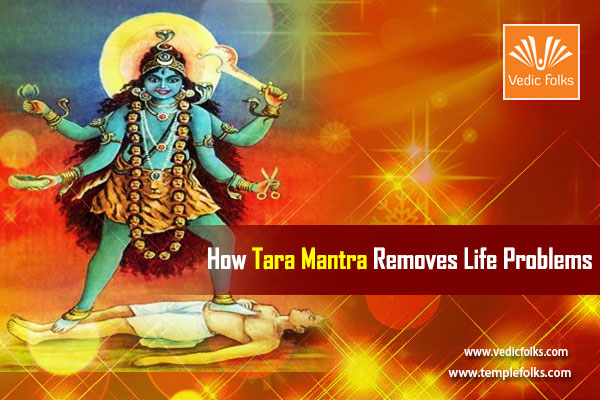 Goddess Tara: The One Who Eases Away All Your Troubles

With striking resemblance to Goddess Kali, Goddess Taradevi’s colour is of blue while Kali is dark complexioned. Goddess Taradevi is second among the Dasa Mahavidyas and manifested to save Lord Shiva from the clutches of death as he drinks the poison that emanates after churning of the milky ocean.

The feminine deity wears a tiger skin around her waist carries a sword, scissor, lotus and human skull. She is seen stepping on Lord Shiva who lies down to control her anger after killing of a demon.

It is interesting to know that this form is known by its four other incarnations namely – Tara, Ugra Tara, Maha Ugra Tara and Neel Saraswathi. She is also considered an incarnation of Lakshmi, Goddess of Wealth. Vedic texts reveal that lord of the nine planets, Guru or Brihaspathi learnt lessons from the powerful Mother Tara. She grants Moksha and protects her people from various disasters and obstacles. Her energies are all pervading which means that she is available easily to her devotees and therefore has earned the name Brahmamayi. Just chant Jaya Jaya Tara with sincere devotion and get all your troubles eased away forever.

Goddess Taradevi represents the pranava mantra ‘Om’ and resides in Manipura chakra.  Tara being dominative and uncontrollable boosts up the confidence of her devotees and takes them to greater heights in their professional success. She has the power of destruction and thus she destroys the negative energy by opening Manipura chakra and promotes one’s health.

Meditating on Manipura chakra and worshipping Goddess Taradevi will improve your health and financial status. It will bring you promotion in career and unmarried people will be blessed with marital opportunities. Tara Devi also protects from misfortunes and mishaps. She grants boons, success in all matters and guards against dangers that befall one especially while travelling long distances in sea.

The chanting of the mantra gives great protection against dangers that come your way and also helps to overcome obstacles in life. Businessmen and entrepreneurs can worship the deity for success in their endeavours. Since the goddess is fearsome and harmful, the mantra ought to be chanted with full sanctity so that the goddess shows compassion and benevolence to her devotee. During dosha periods like pitru dosha, or Jupiter dosha, the Taradevi mantra offers solace. It also helps to gain sudden wealth and prosperity. So recite this powerful mantra to tide over unfortunate events, if having financial insecurity, if evil spirits are torturing you, to remove black magic/evil eye casting and also find success in business losses etc. The goddess is a Mahavidya representing knowledge and therefore she helps improve the intellect and grants grasping powers.

Taradevi has a Tibetan connection too where she is called just Tara and her important Kaula Tantra are called Brihad Nila Tantra and Tararahasya. The former elucidates Neela Saraswathi who is the spouse of the supreme creator. Both the Indian and Tibetan Tara are similar in their powers but differ in their appearance. The goddess has a significant role in Tantric studies of evolution of the universe.