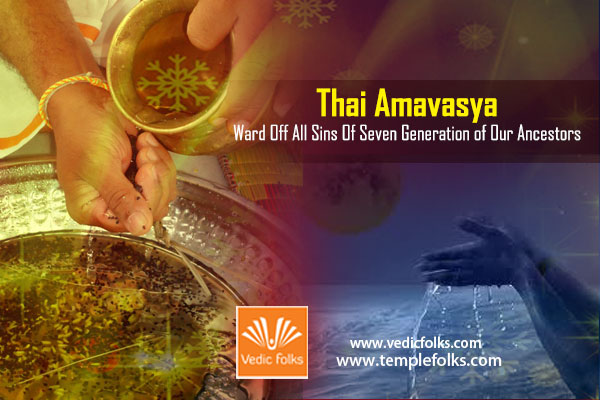 Ward Off All Sins Of Seven Generation Of Our Ancestors

Thai Amavasya is considered a highly auspicious no moon day that falls in the Thai month (January – February) in Tamil calendar. This day is considered very auspicious to offer tarpanam rituals and worship to the departed souls. The important features of Thai Amavasya are tarpanam, tila homam and thithi. It is the first Amavasya during the northward movement of the sun. Therefore, performing tarpanam on this day bring double benefits to us. Most of the people pay respect to their ancestors on Thai Amavasya so that their souls could rest in peace. It is believed that on Thai Amavasya the ancestor’s souls visit their relatives to bless them. Thousands of people from various parts of the country performed tarpanam to the departed ancestors in various holy places on the special occasion of Thai Amavasya. The holy places like Rameshwaram, Kanyakumari and Haridwar, there are more gatherings of people to perform tarpanam to their ancestors at the holy places on this day.

Amavasya- No moon day are highly auspicious to seek the blessings of ancestors and interact with them. Thai Amavasya is a special occasion which can change your life for better. It is one among the most beneficial times for this purpose. By offering tarpanam to ancestors on Thai Amavasya clears the several blockages in your life and removes all curses, sins and pitru dosha.

Why Perform Tarpanam On Thai Amavasya?

Performing tarpanam on Thai Amavasya which is very special for offering oblations to departed souls. If knowingly or unknowingly our forefathers have committed sins it is reflected in our natal charts as Pitru Dosh and being their off springs we are destined to suffer from the bad effects. Due to this malefic effect of planets, even beneficial planets also become unfavorable. This tarpanam destroys all curses and effects of sorcery. It promotes happiness in your life and brings success in all stages of your life. Perform Amavasya Tarpanam to them on that day to attain significant improvements in all walks of life.

Importance Of Performing Tarpanam At Temples

Tarpanam ritual can be performed at holy places like temples, holy rivers and anywhere depending on convenience. Performing tarpanam at temple is considered highly auspicious than the banks of holy rivers and water bodies. By performing this tarpanam at temple your ancestors brings their blessing to you and your future generation for their compassion and their blessings helps you to lead a peace and happy life. It also helps you in attaining salvation, gives peace of mind and washes away your past karma and sins. Get relief from financial problems, success in both personal and professional life and eliminates the effect of black magic, curses and sorcery by performing the tarpanam on Thai Amavasya at Temple.

Performing tarpanam on this day can solve all problems and tribulations in life and lead you to a path of success. It will help to ward off all sins of seven generation of your ancestors. Perform Thai Amavasya tarpanam for your ancestors, please them and receive their blessings to have a happy and a peaceful life with prosperity.

Click Here To Get The Blessings From Your Ancestors