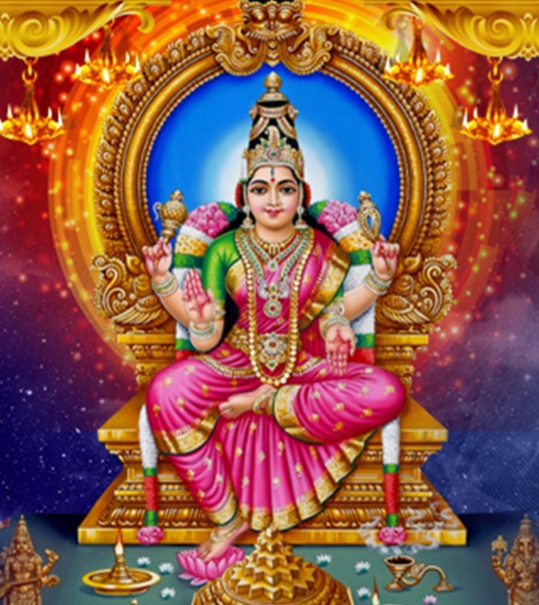 Goddess Bhuvaneshwari is one of the most revered and venerated deities. The sovereign goddess Bhuvaneshwari is known for her immense beauty, divine nature and powerful traits. The great goddess looks golden, illustrating the essential attributes of the sun and adorns a beautiful crescent moon as her headdress. She carries four hands in which she carries a noose, a goad, a lotus and a jewellery pot. Her hand is showcased in a statue that represents that she is giving blessings which also helps the devotees to gain the power to shatter the evil from the world and the supreme goddess owns three luminous eyes. One of the integral aspects linked with the appearance of the great mahavidya is that she is embodied sitting on a throne that has five manifestations of Lord Shiva. Bhuvaneshwari Mahavidya is also the commander of the entire universe and is surrounded by godheads.

Goddess Bhuvaneshwari discovers a prominent place in mahavidyas as a tantric goddess. Bhuvaneshwari Devi is the fourth powerful power stated in the Tantras. She is the divinity who decrees the entire world and rules the universe with utmost sovereignty. The influential mahavidya is a supreme force behind creating and sustaining the universe. The great goddess is also a known incarnation of commanding goddess Durga and Parvati, and her shakti form is an important manifestation of goddess Kali. In Vedas, the persuasive goddess is Aditi, the infinite mother who carries the whole universe in her powerful cosmic womb. The ancient legends and scripts depict that Lord Rama propitiated Bhuvaneshwari mahavidya before his successful and ultimate assault on monster Ravana. The potent mahavidya is an embodiment of affection, warmth, compassion and love.

Bhuvaneshwari Mahavidya sacred Homam awards with great blessings and precious aura of goddess Bhuvaneshwari. The significant fire ritual safeguards us from the wrath of the cruel world by giving us space and shelter to live heartily. Bhuvaneshwari Mahavidya helps her worshippers in developing a generous and happy nature. The Homam helps to shed problems such as wealth loss or debt accumulation, empowering with good wealth and meaningful possessions. It also bestows boons of good health and also imparts beauty and wisdom to get proponents. By following the path guided by goddess Bhuvaneshwari, we can attain good fortune and abundance.  The incredible godhead removes all the major obstacles from a follower’s life, granting them immense bliss and tranquillity.

If you wish to gain all the above advantages then subscribe to Bhuvaneshwari Mahavidya Homam. Our assistance will support you in the rightful execution of the precious ritual.