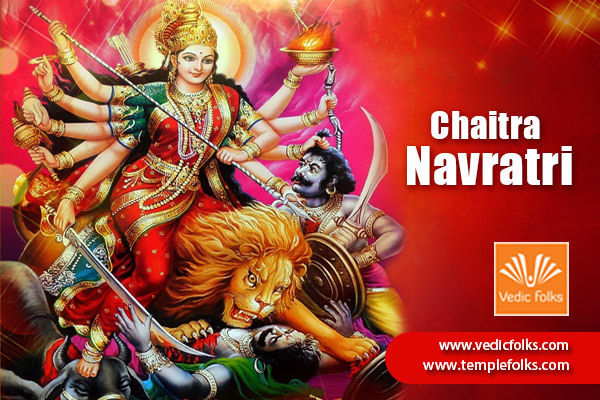 Chaitra Navratri is the auspicious occasion of Navratri, which falls in the spring season that is in March and April. During the nine days of Chaitra Navratri, different forms of goddess Durga are celebrated. Grand homams and Abhishek are organized to celebrate the supremacy of Durga Devi during Navratri. Chaitra Navratri celebration takes place across India with utmost grandeur and contentment.

There lies a significant legend behind the celebrations of Chaitra Navratri. There was an evil demon called Mahishasura. He created turbulence in three realms that are Earth, Heaven and Hell. Because of the boon of Lord Brahma, it was impossible to kill him, and only a woman could finish him. The activities of the monster Mahishasura tensed all the godheads. The supreme godheads- Lord Vishnu, Lord Shiva, and the creator Lord Brahma, created the supreme goddess Durga to destroy him. There took a long war between goddess and demon which extended for fifteen days. Mahishasura used to take different strange forms to stave off the wrath of Goddess Durga. The day he took the figure of a buffalo, Goddess Durga finished him from the root. Since then, Chaitra Navratri has started being celebrated to glorify the prominence of Goddess Durga.

On Chaitra Navratri, worshippers observe a fast of nine long days. They only eat fruits, milk items and food composed of kuttu flour and sabudana during this period. Devotees abstain from food items like onion, garlic and non-vegetarian items during the entire course of Navratri. The puja place is cleaned, and an Akhand lamp is lit and maintained for nine days.

The celebrations of Chaitra Navratri begins by worshipping Goddess Shailputri or who is also renowned as the daughter of the mountain’s king. Goddess Shailputri is the other prominent name for goddess Parvati. By doing her worship, one can attain utmost relaxation, marital bliss and positivity in life. On the second pious day of Chaitra Navratri, Devi Brahmcharini or a great avatar of Goddess Durga is celebrated and worshipped. Prominent Goddess Chandraghanta is worshipped on the third day of the event. The fourth day glorifies the significance of Goddess Kushmanda. Devi Kushmanda is the originator of the vast universe. The worship of the great goddess Skandmata takes place on the fifth day of Chaitra Navratri. Devi Katyayani is adored on the sixth day. Goddess Kal Ratri is worshipped on the seventh day. She is the most powerful incarnation of Goddess Durga. Devi Maha Gauri puja takes place on eight days. The last day of Chaitra Navratri marks the worship of Goddess Siddhidatri.

There is a plethora of bliss that one can attain

Devotees can amass immense levels of satisfaction during Chaitra Navratri. Different goddesses are worshipped during this festival which occupies diverse and substantial attributes. Thus, honouring them with tremendous pleasure can help in attaining all those values. Devi Durga is a manifestation of three supreme Hindu godheads- Goddess Lakshmi, Kali, and Saraswati. Goddess Lakshmi blesses her devotees with good financial stability and rewards them with monetary gains. Goddess Kali is very fierce and is known to bestow courage and vitality to her devotees. Goddess Saraswati is the epitome of knowledge, vigour and intelligence. Engage in Chaitra Navratri with sheer dedication and devotion to seek the auspicious boons of all the prominent Hindu Goddesses.