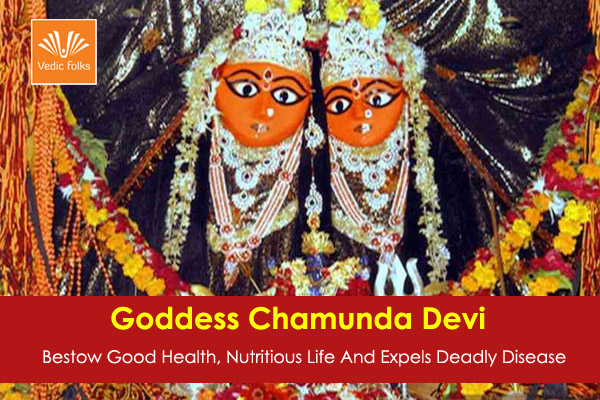 Goddess Chamunda devi temple is located in Chamundeshwari hill which is 13km far away from the city of Mysore in Karnataka State. This temple after the named Chamundeshwari or Goddess Durga temple Mysore Maharajas invoking this goddess with great respect. Goddess Chamunda , a ferocious form of Goddess Shakti.  According to RamaKrishna Gopal Bhandarkar Goddess Chanmunda was worshipped by the tribal people or “Mundas”  in the regions of Central India. These tribal people offer liquor to Goddess Chamunda to get the blessings from them. According to one legacy, Goddess Chamunda evolved from the eyebrow of Goddess Chandika Jayasundari. The Chamunda Devi Temple is located in  Palampur and one of the major tourist attractions in a hill station. This temple contains a lot of history and  ancient it originally came into being way back in the 16th century and has a lot of spiritual legacy attached to it and several legacy associated with the story of shifting this temple at one point as well. According to the legacy, it was around 400 years ago that a king and a priest prayed to Chamunda Devi asking her consent to shift the image to an accessible location. The legend suggests that the goddess appeared in the priest’s dream and suggested to him the exact location of where the idol would be found. This was told to the king and his men recovered the ancient idol and placed it at the place where the temple has been built now.

The Chamunda Devi Temple has always been a major tourist attraction for anyone who visits Palampur, a hill station famous for its stunning natural beauty and plenty of tea gardens. The temple attracts travellers from all parts of India, not only because there are a lot of spiritual legacies  attached to it, but also because the temple is ancient and its architecture, although simple, has touches of traditional Himachali temple structures. The temple has also proved to be a popular spot for travellers who like to do photography in ancient temples, such as this one, perched up on a hill station. Apart from the plenty of tourists who visit the Chamunda Devi Temple as a major tourist attraction of Palampur, the local residents of the quaint hill town consider it one of the holiest places of worship in the area, especially because of its many interesting legcy and history that are attached to it. The local  residents and other devotees from the neighbouring hill towns visit this temple in order to offer their prayers to the Goddess Chamunda devi.