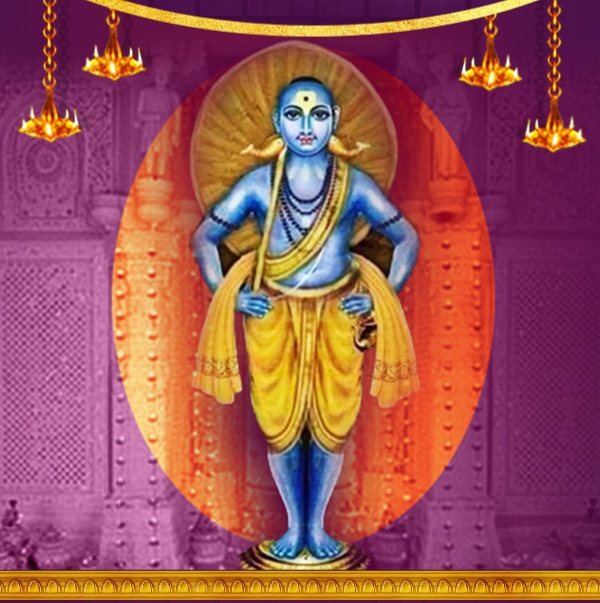 Vamana is the fifth incarnation of mighty Lord Vishnu. Lord Vishnu, in Vamana’s aspect, sustains the earth and protects it from all sorts of demons, evil energies and demonic forces. He promotes harmony, glory and happiness on earth. Lord Vamana is a brahmin aspect of Lord Vishnu. He is admired as the first Dashavatara of Lord Vishnu in the Treta Yuga after Lord Narasimha.

Once there was a mighty asura king called Bali who gained enormous powers through religious prosecutions. He conquered gods and started ruling the universe. Lord Indra and other deities approached Lord Vishnu to seek assistance in defeating the vast forces of Bali. Lord Vishnu manifested as Vamana, a dwarf brahmana to deal with Bali. When Bali performed a Yagya, Lord Vishnu appeared as a mini brahman. Bali asked the little brahman if he wanted anything. The little brahman replied that he wished for no luxuries or expensive gifts. He just wants enough land so that he can cover three steps. The asura King Bali laughed and said only this much you want, But Bali’s advisor was dubious about the real identity of the brahman.

Further, Bali agreed to fulfil the Brahman’s wish. But, soon, the little Brahman grew into a giant being and grew bigger than earth. He covered and occupied land in his first step and captured Amravati, Bali’s kingdom, in his second step. Bali recognised that the Brahman is none other than the supreme Vishnu. He then offered his head to Vishnu for the third step. Later, Lord Vishnu sent Bali to Pataal Loka and made him its king. He freed the gods and devas and granted them their powers back.

In Vamana Avatar Homam, a fire kund is set with a sacrificial bonfire. Devotional offerings take place, and other rituals are performed to cherish the imperial deity Vamana. Devoting fruits, flowers and prasad of sweets are devoted to the fire ritual. Mantras and slokas are chanted in praise of the Supreme Lord Vamana in the Homa ritual.

Vamana Avatar Homam blesses devotees with the mighty blessings of Lord Vishnu. Lord Vishnu’s avatar in the form of Vamana safeguards them from all the obstacles, pains and worries. It keeps away the wrath of evils and enemies. It brings peace and abundance in life. The auspicious fire ritual discards negative energies and brings immense bliss. It boosts stable peace of mind and enhances spiritual awakening calibre.

If you wish to gain all these advantages, then connect with us. We will assist you in the execution of Vamana Avatar Homam. It will bring the godsends of Lord Vishnu in his Vamana avatar to you. We have proficient priests and suitable arrangements to conduct the Homa ritual. Without further delay, connect with our team and gain significant advantages by being a part of Vamana Avatar Homam.

Next post The great significance of Patala Bhairavi Homam