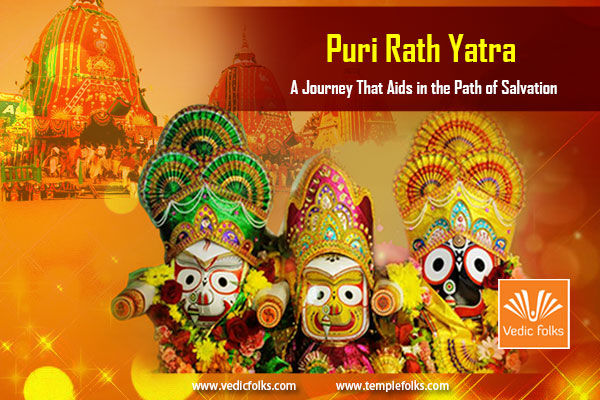 Rath Yatra or the Chariot festival is one of the oldest and most famous festivals which is celebrated every year in the state of Orissa, India. The importance of this festival is also mentioned in Padma Purana, Skanda Purana and Brahma Purana. It is an annual event, which is celebrated in the month of June or July. According to Oriya Calendar, this festival is celebrated on the 2nd day of the Shukla Paksha in the month of Ashadha. This year, it will be held on 4th July. This festival is popularly known as Jagannath Rath Yatra, dedicated to Lord Jagannath (Lord Krishna) and his sister Subhadra and his elder brother Baladeva. Jagannath Rath Yatra is also known as Chariot festival, Navadina Yatra and Gundicha Yatra.

A Ritual That Proves Everyone Is Equal

Three wooden idols of three deities Lord Jagannath, Goddess Subhadra and Lord Baladeva are taken from the Jagannath Temple to Gundicha Temple. These wooden idols are decorated and placed in chariots. Before the Rath Yatra starts, the wooden idols are bathed with 108 buckets of water, this event is called Snana Purnima. Then the idols are placed in isolation till the day of Yatra, which is called Ansara. Chhera Pahara is the holy ritual performed on the day of the procession. This event is performed by the King of Orissa. At that time, the three deities are brought from the temple by the King and placed on the decorated chariots. Before keeping them on chariot, the royal successor himself sweeps the chariot with a gold handle broom and decorates the chariot with colorful flowers. The path on which the chariot moves is also cleaned by the king. This ritual proves that everyone is equal in the eyes of Lord Jagannath.

Jagannath temple is accessible for the people of all faiths on the day of Rath Yatra. Anyone can visit the temple on this day. The three deities remain at the Gundicha Temple for 9 days. Later, they are back to their homes. This return Yatra to their homes is called as Bahuda Yatra.

After reaching the Jagannath Temple in the evening, they wait outside the temple. Next day morning, the three idols are adorned with new clothes and decorated like babies. This ritual is called Suna Vesa. On the next day, they are placed again in the sanctum sanctorum. This event marks the end of the Jagannath Puri Rath Yatra.

The Rath Yatra Is A Feast To The Eye

The preparation of the Rath starts on the auspicious day of Akshaya Tritiya. These three chariots pulled by using 50 meters long ropes. It is believed that pulling this rope will help to remove bad karma and bad deeds.

Lord Jagannath’s chariot has 18 wheels, 45.6 ft height and it is called as Nandighosa. Lord Baladeva’s ratha is called Taladhvaja and it has 16 wheels, 45 ft in height. Goddess Subhadra’s chariot has 14 wheels and 44.6 ft height and called Devadalana. These three chariots are decorated with paints, ornaments and designs in a beautiful manner and it’s a feast to the eye.

At the day of procession, Goddess Subhadra’s chariot is pulled first and the chariot of Lord Baladeva’s is pulled next and that of Lord Jagannath’s chariot at last. The distance between Jagannath temple to Gundicha temple is 3 km. The whole enthusiasm of devotees clubbed with chants, conches and drum beating takes a few hours to reach the Gundicha temple. They can seek blessings of the three deities for the next nine days.

During the Bahuda Yatra, they make a halt at the Maa Mausi Temple. Here they offer a pancake to the devotees. It is believed that the sweet pancake is a poor man’s food and Lord Jagannath is fond of it.

Puri Rath Yatra is a journey that aids in the path of salvation. The Jagannath, Baladev and Subhadra rituals on the day of Puri Rath Yatra brings unity in the family especially among siblings. It washes off sins and grants material comforts to the devotee.

All types of evil forces and effects of sorcery and witchcraft can be destroyed. Love and understanding within the family will flourish. It also helps to gain power and strength and also bolsters marital relationships. It also paves way for Moksha, the ultimate goal of every individual. It also ensures material prosperity and victory in all your undertakings.