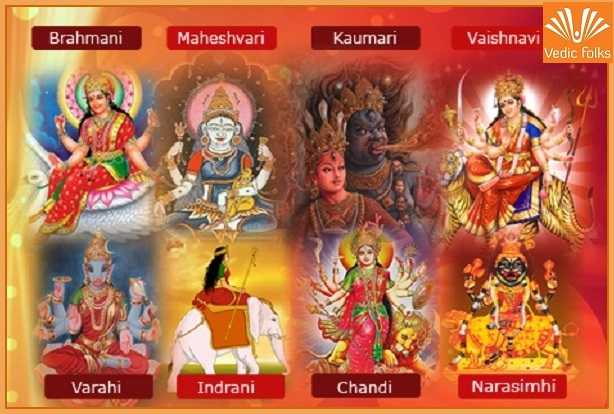 The Matrikas has a paramount significance in Atharva Veda. In Shaktism, they are “described as assisting the great Shakta Devi (goddess) in her fight with demons.” They are also connected with the worship of warrior god Skanda.

The iconographical features of the Matrikas have been described in various scriptures such as Puranas and Agamas and the epic Mahabharata. Puranas like Varaha Purana, Agni Purana, Matsya Purana, Vishnudharmottara Purana and Devi Mahatmya, a part of Markandeya Purana as well as Agamas such as Amsumadbhedagama, Surabhedagama, Purvakarnagama and Rupamandana describe the Matrikas.

Story behind Ashta Matrikas According to Shiva Purana

During ancient times, there lived a mighty demon named ‘Andhakasura’. Andhakasura had become arrogant because of a boon of immortality received from Lord Brahma. Being tormented by Andhakasura, all the deities went to seek Lord Brahma’s help. Lord Brahma took the deities to Lord Shiva who agreed to kill the wicked demon- Andhakasura. The battle commenced and a fierce dual fight broke out between Lord Shiva and Andhakasura. Shiva attacked Andhakasura with his trident. Stream of blood oozed out from the wound, but to Shiva’s utter amazement each drop of blood falling on the ground resulted in into the creation of numerous Andhakasuras. In a short time the battlefield was overcrowded with countless Andhakasuras.

Now Shiva’s anger crossed all limits and he thundered loudly. Flames emanated from the mouth of enraged Shiva resulting into the manifestation of goddess ‘Yogishwari’. Similarly, seven more goddesses manifested themselves from different deities- Vaishnavi from lord Vishnu, Brahmi from Lord Brahma, Kaumari from Kartikeya, Mahendri from Indra, Yami from Yama, Varahai from Lord Varaha and Maheshwari from lord Narayan. All these eight goddesses came to be known as ‘Matrikas’ and Lord assigned them the auspicious day for their worship. A devotee who worships these eight matrikas on ashtami is blessed. The use of ‘bael’ (wood-apple) fruit on this day has great significance.

The Ashta Matrika or Ashta Matara as described in Devi Mahatmya:

Brahmani (Sanskrit: ब्रह्माणी, Brahmâṇī) or Brahmi (Sanskrit: ब्राह्मि, Brāhmī) is the Shakti (power) of the creator God Brahma. She is depicted yellow in colour and with four heads. She may be depicted with four or six arms. Like Brahma, she holds a rosary or noose and kamandalu (water pot) or lotus stalk or a book or bell and is seated on a Hamsa (identified with a swan or goose) as her vahana (mount or vehicle). She is also shown seated on a lotus with the hamsa on her banner. She wears various ornaments and is distinguished by her basket-shaped crown called karaṇḍa mukuṭa. Maa Brahmani devotees get relief from various troubles like black magic, evil forces and avoid stress and gain mental peace. Brahmani Homam helps an individual to live a peaceful life without any stress. Read More: http://www.vedicfolks.com/others/karma-remedies/homams/brahmani-homam.html

Vaishnavi (Sanskrit: वैष्णवी, Vaiṣṇavī), the power of the preserver-God Vishnu, is described as seated on the Garuda (eagle-man) and having four or six arms. She holds Shankha (conch), chakra (Discus), mace and lotus and bow and sword or her two arms are in varada mudra (Blessing hand gesture) and abhaya mudra (“No-fear” hand gesture). Like Vishnu, she is heavily adorned with ornaments like necklaces, anklets, earrings, bangles etc. and a cylindrical crown called kiriṭa mukuṭa. Worshipping Ma Vaishnavi can remove all kind of hindrance or difficulties in life.  Performing Varahi Homam protect us from the eyes of evil effects and black magic. Read More: http://www.vedicfolks.com/celebrity/karma-remedies/homams/sri-varahi-homam-take-refuge-in-the-power.html

Maheshvari (Sanskrit: माहेस्वरी, Māheśvarī) is the power of God Shiva, also known as Maheshvara. Maheshvari is also known by the names Raudri, Rudrani andMaheshi, derived from Shiva’s names Rudra and Mahesh. Maheshvari is depicted seated on Nandi (the bull) and has four or six hands. The white complexioned, Trinetra(three eyed) goddess holds a Trishula (trident), Damaru (drum), Akshamala (A garland of beads), Panapatra (drinking vessel) or axe or an antelope or a kapala (skull-bowl) or a serpent and is adorned with serpent bracelets, the crescent moon and the jaṭā mukuṭa (A headdress formed of piled, matted hair). One can get blessings from both Shiva and Parvati on worshipping Maa Maheshvari and one can get free from any sorts of danger caused by animals. Maheshvari Homam helps to keep you away from the danger causing from animals. Read More: http://www.vedicfolks.com/others/karmaremedies/homams/maheshvari-homam.html

Indrani (Sanskrit: इन्द्राणी, Indrāṇī), also known as Aindri, (Sanskrit: ऐन्द्री, Aindrī), Mahendri, Shakri, Shachi’ and Vajri, is the power of the Indra, the Lord of the heaven. Seated on a charging elephant, Aindri, is depicted dark-skinned, with two or four or six arms. She is depicted as having two or three or like Indra, a thousand eyes. She is armed with the Vajra (thunderbolt), goad, noose and lotus stalk. Adorned with variety of ornaments, she wears the kiriṭa mukuṭa. Indrani Homam favors you to achieve all your desires to live a completely joyful life. Read More: http://www.vedicfolks.com/others/karma-remedies/homams/indrani-homam.html

Kaumari (Sanskrit: कौमारी, Kaumarī), also known as Kumari, Karttikeyani and Ambika[36] is the power of Kumara (Kartikeya or Skanda), the god of war. Kaumari rides a peacock and has four or twelve arms. She holds a spear, axe, a Shakti (power) or Tanka (silver coins) and bow. She is sometimes depicted six-headed like Kumara and wears the cylindrical crown. Devotees of Maa Kaumari are blessed with the powers to defeat struggles and can get relief from diseases caused by heat. Kaumari Homam is very effective to get recover from heat related disease. Read More: http://www.vedicfolks.com/others/karma-remedies/homams/kaumari-homam.html

Varahi (Sanskrit: वाराही, Vārāhī) or Vairali is described as the power of Varaha – the boar-headed form of Vishnu or Yama – the god of death, has a boar head on a human body and rides a ram or a buffalo. She holds a Danda (rod of punishment) or plough, goad, a Vajra or a sword, and a Panapatra. Sometimes, she carries a bell, chakra, chamara (a yak’s tail) and a bow. She wears a crown called karaṇḍa mukuṭa with other ornaments. She blesses her devotees to get rid of evil eye casting, black magic, lack of courage and confidence. She bestows with wealthy, healthy and courageous life. Performing Varahi Homam protect us from the eyes of evil effects and black magic. Read More: http://www.vedicfolks.com/celebrity/karma-remedies/homams/sri-varahi-homam-take-refuge-in-the-power.html

Chamunda (Sanskrit: चामुण्डा, Cāṃuṇḍā), also known as Chamundi and Charchika is the power of Devi (Chandi). She is very often identified with Kali and is similar in her appearance and habit. The identification with Kali is explicit in Devi Mahatmya.[ The black coloured Chamunda is described as wearing a garland of severed heads or skulls (Mundamala) and holding a Damaru, trishula, sword and panapatra. Riding a jackal or standing on a corpse of a man (shava or preta), she is described as having three eyes, a terrifying face and a sunken belly. Devotees of Maa Chandi blessed with trouble free life. Chandi saves her devotees by clearing all the obstacles in the path of success. Chandi (Chamunda) Homam is considered to be very powerful homam which helps to eliminate hindrances and difficulties in the path of success. Read More: http://www.vedicfolks.com/health/karma-remedies/homams/chandi-homam.html

Narasimhi (Sanskrit: नारसिंहीं, Nārasiṃhī), power of Narasimha (lion-man form of Vishnu), is a woman-lion and throws the stars into disarray by shaking her lion mane.Narasimhi bestows her devotees a jappy and fullfling life without any problems with enemies. Narasimhi or Pratyangira Homam completes the needs of an individual by evading court cases, enemies’ problems and other issues in greater extent. Read More: http://www.vedicfolks.com/others/karma-remedies/homams/pratyangira-pashupatom-homam-.html 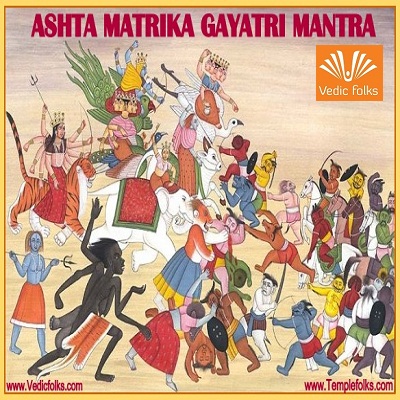 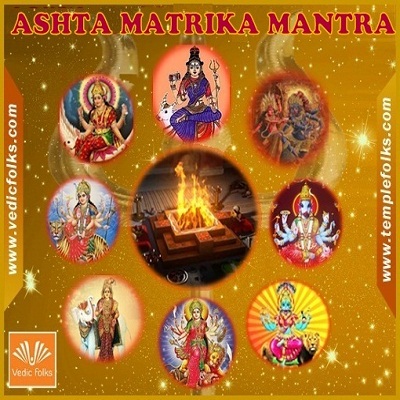