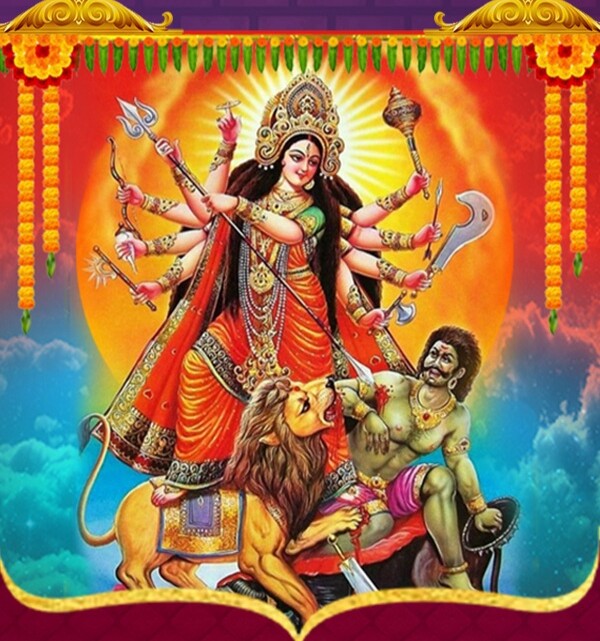 Maha Chandi is a supreme incarnation of goddess Mahadevi or Durga Devi. She manifested to destroy evil energies and bring harmony to the world. She is the destructive form of the commanding goddess Chandi. The supreme divinity is cherished as Mahamaya or the one who performs terrific miracles. She is also cherished as Abhaya or the feminine figure with no fear.

Maha Chandi is a highly significant and revered deity in the vedic realm. She discovers glorious elaboration in Kali Purana, Skanda Purana and Narayana Purana. The mighty goddess finds tales and mythological stories that define her strength and valour. Goddess Maha Chandi is an aspect of goddess Durga. The imperial goddess Durga took the embodiment of Goddess Chandika to destroy an evil monster Mahishasura. Goddess Chandika further incarnated into two divinities- Chandi and Chamunda.

A prominent legend linked with goddess Chandi is that she also helped goddess Kali in killing Raktabija, a wicked demon.  Raktabija was creating havoc in the devaloka and on the earth with his wicked actions. He was blessed with a boon that he cannot be killed. Whenever even a drop of her blood will fall, a new demon will originate from him. This made killing Raktabija a tough game for all the godheads. All the devas then approached goddess Kali to get rid of the catastrophes of Raktabija. Goddess Kali and Chandi reunited their strengths bringing Raktabija to a brutal end.

Maha Chandi Homam is an extensive fire ritual that brings the glorious aura of goddess Durga. In this Homa ritual, a full-fledged arrangement is made. A fire kund is lighted to attract the vibrant aura of goddess Chandi. Mantras, stotras and legends of the imperial goddess Maha Chandi are chanted. Devotional offerings and other specific rituals are followed to execute the Homam.

Maha Chandi Homam brings the glorious blessings of goddess Mahadevi or Durga in life. Goddess Chandi grants the immense courage to fight the negativity of the world. She eliminates negativity and darkness from life, fulfilling it with only joy and glories. This fire ritual enriches life with glory and contentment.

If you wish to receive the supreme blessings of goddess Chandi then get in touch with us for the execution of Maha Chandi Homam. Our firm is known for bringing the best spiritual aids in the entire Vedic realm. We have proficient priests and other suitable arrangements to organised the Homa ritual for you.

Previous post The incredible importance of Rahu and Ketu Homam